If you're an employee who has lost a job because you were fired, you may be curious regarding the laws about getting fired and whether or not you have any recourse and if you can file for unemployment. It all depends on why you lost your job.

Most workers in America fall into the category known as at-will employees. This does not cover union or government employees. At-will employees can be fired at any time without the employer giving an explanation; however the reasons you get fired cannot be discriminatory or illegal.

This may seem unfair, but on the other side of the matter, the employee can also quit at any time without an explanation. However, even though you have the right to quit on the spot, two weeks notice is standard practice. Before you do anything rash, think ahead. What will you tell your next potential employer? If prospective employers learn you walked out on a job without giving notice, it may stop them from hiring you because they are looking for someone loyal, responsible and dependable.

Laws About Getting Fired Illegally

By Federal law, it is illegal for most employers to fire an employee for one of the reasons listed below. However, it is important to note that many state laws are wider in scope than federal law so if you think you may have a case, check with the laws in your state. For example some states have laws about getting fired based on discrimination regarding sexual orientation while others do not.

Most states also have anti-discrimination laws that make it illegal to fire a person for reasons listed in the federal law. These include:

To learn the specifics of anti-discrimination laws in your state, contact your state's fair employment office.

If you feel you have been a victim of discrimination, and were fired for one of the reasons above, you can initiate a retaliation claim under the state and federal anti-discrimination law. Retaliation complaints must be investigated judiciously, but filing a complaint does not guarantee a positive outcome for the employee. If the employer has diligently documented the employee's marginal or poor performance and other work-related deficiencies it will help them prove their case was not discriminatory but justified.

Another federal law that protects employment status is The federal Employee Polygraph Protection Act. This law prevents most employers from firing employees just because they refuse to take a polygraph test. On a state level, a good number of state laws also have enacted legislation that sets out strong bans against the use of lie detector tests.

As long as an employee is legally eligible to work in the United States, the Federal Immigration Reform and Control Act (IRCA) prohibits most employers from using alien status as a reason for firing a worker.

The federal Occupational Safety and Health Act (OSHA) protects employees who complain about work conditions that don't line up with state and/or federal health and safety guidelines. If you were fired for such a reason, then the law is on your side and you should file a complaint. 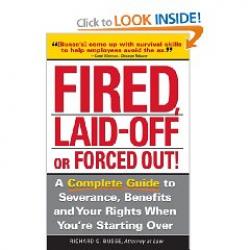 When it comes to violations of public policy you'll have to check what your particular state deems to be a violation. These are issues that deal with what is determined to be morally or ethically wrong and as such can be relative. Because of this, what is deemed a violation of public policy varies from one state to another. Even with this degree of relativity, most states agree that the following actions violate public policy:

If you are fired, be cautious. Don't sign documents such as a release of claims because this forfeits your right to sue. Read any documents you are given carefully, and if you have questions, don't hesitate to talk to outside sources or a lawyer. Most of all, don't be pressured into signing something you don't want to sign.

7
Comments
© 2006-2020 LoveToKnow, Corp., except where otherwise noted. All Rights Reserved.
Laws About Getting Fired